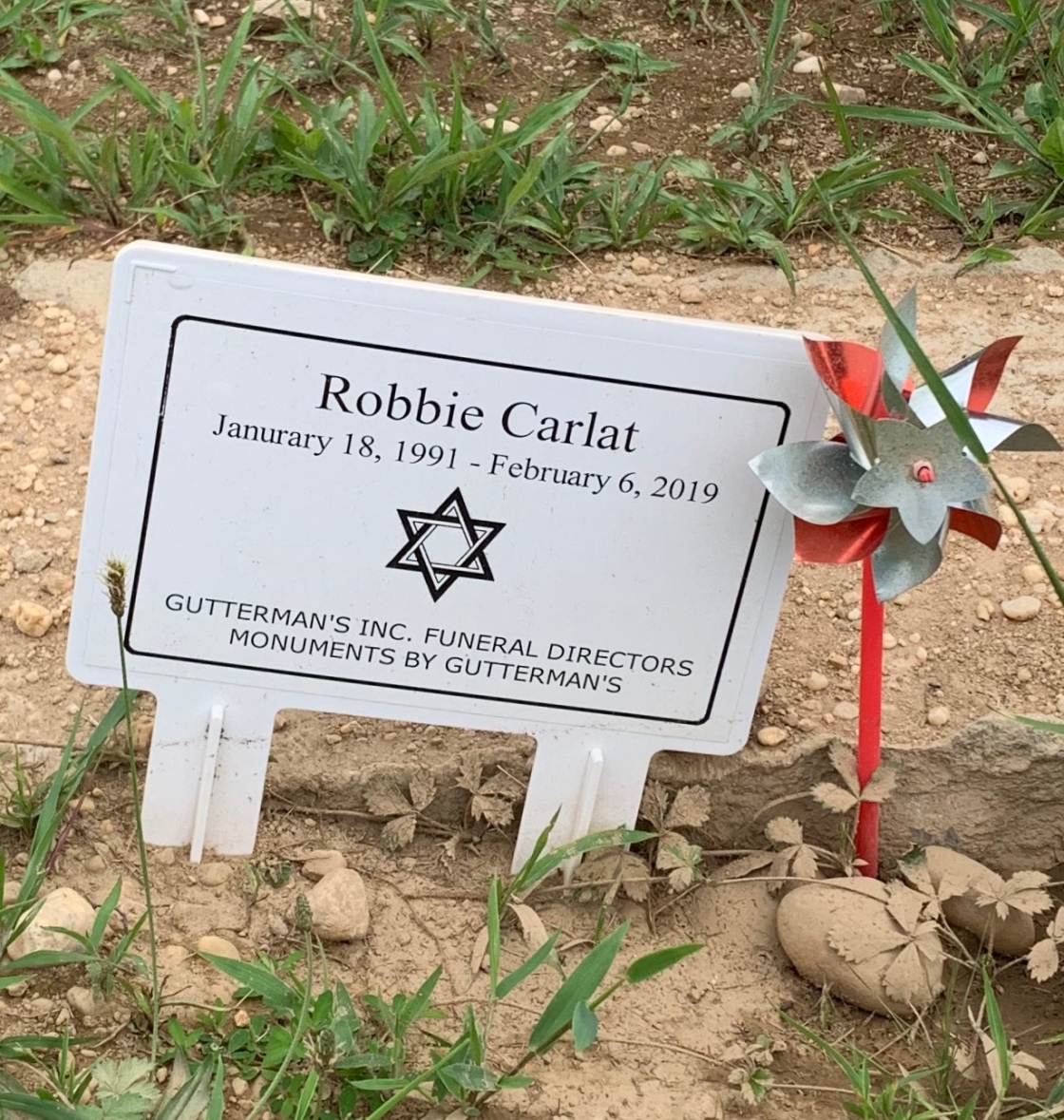 Caryn and I were going back and forth last week about an inscription for Rob’s headstone, which is just another example of how the fun never stops for recent members of the world’s shittiest club.

Finding the perfect words was a little more difficult than we had anticipated. We wanted to choose something that truly represented who Rob was, and also wanted him to stand out from his boring cemetery neighbors with their generic “beloveds,” “precious angels” and “missing you forevers.” For better and worse, Rob stood out in life, so we felt that embodying his spirit in death shouldn’t be any different.

At first, we had decided to go with a few heartbreaking lines from Warren Zevon’s saddest song, “Keep Me in Your Heart” —If I leave you it doesn’t mean I love you any less, Keep me in your heart for a while—but it wasn’t sitting right with us. The elegiac lyric is beautiful and poetic, but it just needed to be more Rob.

Then Caryn came up with the brilliantly simple idea of using Rob’s tattoo—“Life Rolls On”—written in cursive, exactly the way it looked on his forearm. Despite the irony of those words etched on a headstone marker, they convey everything you need to know about him. It was the perfect welcome mat for his new home.

That was part one, but we still needed another line underneath it, something that described who Rob was and how much we loved him. We played around with several variations on “the sand and the water” and the whole “I have a space in my heart that never closes” thing, but none of those moving words seemed to work in this context.

I then tried a truthful tack with: “An all-around pain in the ass who was deeply loved by many.” I knew it didn’t express a mournful tone or proper sentiment, but it was right on the money and I think Rob would’ve liked it. Caryn didn’t.

She texted me a bunch of quotes she found online, things like You are my son, my moon, my stars and I love you every day and now I will miss you every day. We agreed that both were too vanilla, the kind of stuff you find when you google “headstone inscriptions for son.” This whole ordeal was a little like picking out the perfect birthday card, with the added pressure of it lasting forever.

Her next suggestion was that we try some of Rob’s nicknames—Grinder, TYCO, Pastafarian—and I countered with King of Shenanigans, unreliable narrator and fuckin’ idiot. (Perhaps revealing our creative process here isn’t such a great idea.)

Needing some help, I called my friend John, who is the best editor I’ve ever known, and the two of us, with decades of experience massaging words, crafted the following gem of an epitaph:

King of shenanigans, deeply loved by many

Caryn’s first reaction was that “shenanigans” made Rob sound like too much of a prankster, and I subsequently felt that it had no depth of feeling (which is really the fancy editor way of saying that it sucked), so we were back to square one. When it came to Rob—in life and death—nothing was ever easy.

“Try to think of one phrase to describe the fuckin’ idiot unreliable narrator Pastafarian motherfucker,” I texted Caryn a few minutes later. “All kidding aside, more than anything, you need to be happy with this.”

“Both of us do!” she texted right back. “I want us both to say that it’s perfect!”

A few hours later, she sent me a quote from Shel Silverstein’s classic “The Giving Tree,” one of my all-time favorite children’s books. She had to tweak it slightly, but the meaning remains the same. Here it is:

And they loved a little boy very, very much, even more than they loved themselves.

“This is pretty great!” I texted her.