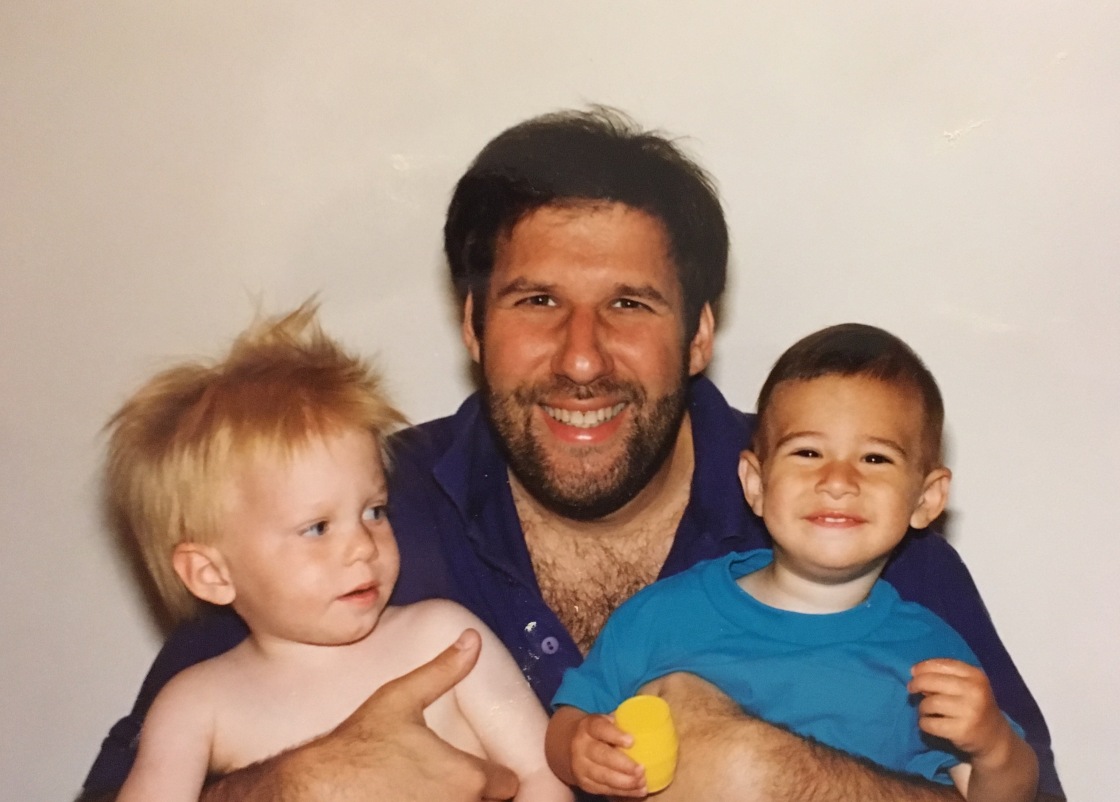 I thought this would be as good a day as any to say a few words about Zach.

So I started to write a whole bunch of nice things about the nicest person in the world, and then I remembered that I had written a story about him for Family Life magazine 20 years ago. Here it is.

“Daddy, can we have our little talk now?” seven-year-old Zachy will ask in his small raspy voice right before bedtime. This is our special time together–just the two of us. We get all cozy underneath his blanket and trade stories about our days at school and work, him telling me about his meetings and deals, me telling him about recess and the snacks I traded for at lunch. Tonight, though, I need Zachy to help me with my homework–a story I’ve been assigned to write about him.

“About me?” he asks, all lit up as if I’d just handed him a bag of Hershey’s Kisses.

“Yeah, what should I say about you?”

“That I’m funny, that I’m cute, that I’m crazy, that I pick my nose, that I always have stuff in my toes from my socks,” he says excitedly and then adds, “and that I love my brother.”

Of course, that’s the reason it matters the most.

Zachy­–adorable, bright, funny and sweet as he is–has always come second. We’d like to think this is purely about age, the lot in life of the younger sibling, but it’s more than that. When we adopted Robbie as a newborn eight-and-a-half years ago, it was the culmination of inconceivable perseverance (no pun intended): We’d been trying to have a biological child for four-and-a-half years. In turn, Zachy’s conception and birth was as shockingly wonderful as walking into your own surprise party. Robbie was a gift we worked hard for. Zachy was a gift we received.

And it’s this basic difference that has always separated the two of them–even, at one time, in my heart. For months after Zachy was born, it was a strange point of pride with me that I felt more strongly about Robbie than I did toward my own flesh and blood. But that is no longer how I feel. I love both of my sons the same, but different.

They’re in love with each other, too, and dance the typical big-brother little-brother two-step, which is to say they’re at each other’s throats regularly. But Zachy also recognizes that Robbie is different.

Zachy is the little brother, but is already bigger than Rob. Yet Robbie knocks him around like one of his stuffed animals and Zachy takes his licks accordingly because he doesn’t yet know that he doesn’t have to. It’s just not in Zach’s nature to fight back. Or is it something else?

Zachy is the little brother–and in many ways, he will always be–but he often acts more like the older sibling. He seems to know instinctively something about their disparity, but doesn’t yet know how to express it in words. Zach knows, for example, that he is somehow more secure than Robbie, and for good reason.

Not only does Zachy realize all of this about his older brother, he willingly accepts it. He knows Robbie needs him more than he needs Rob, and he’s generally happy to be needed. Zach also knows that his brother needs us in a way he never will.

I’m reminded of this distinction every morning as soon as I get to work: A photograph of each of my sons sits on my desk, and Zachy’s smile is the first ray of light that greets me before I get my coat off. It’s eclipsed a moment later, however, by the nearby photo of Robbie, struggling to fake a cheesy grin.

As hard as we try to treat them as equals, Robbie always seems to be a little more equal than Zach. Is it just a question of personalities? Robbie can be terribly stubborn, while Zachy is adaptable. Robbie will often freak out over the smallest detail, so we’re more inclined to say “no” to Zachy because we know he’ll handle it and “yes” to Robbie because we know he won’t.

Nowhere is this inequity more apparent than in the way we discipline them. I find it much easier to yell at Zachy. At first I thought it was because he was stronger and could take it better–like Timothy Hutton’s character in Ordinary People–but the real reason is more obvious. I don’t want to hurt Robbie anymore than he already has been hurt.

Not being adopted somehow gives Zach an emotional edge–a sense of confidence Robbie may never have. Zachy doesn’t have the unanswered questions Robbie will always carry around with him. Zachy will never struggle to answer some nice lady’s asking, “Where did you get your blond hair from?” Zachy is connected to us in a way that Robbie can never be, so we overcompensate on Robbie’s behalf. And although Rob knows we love him, there’s still a small part of him that remains uncertain.

Which has a big effect on Zach. Robbie craves our constant attention, our unending reassurance, our eternal patience; and because of these daily requirements, he tends to monopolize a great deal of our time. This can be draining on all of us, and it should therefore come as no surprise that we sometimes wind up taking Zach for granted.

We often joke that Zachy’s infancy went unnoticed, other than the fact that he looked like Manuel Noriega when he was born. We have hours and hours of videotape of Robbie as a baby, a handful of isolated minutes of Zach on his first few birthdays. In many ways, this seems typical of the whole second-child syndrome. The thrill of all of the “firsts”–smiles, words, steps–are slightly diminished the second time around, and having two babies at the same time doesn’t always allow you to enjoy either of them.

Zachy has invariably been a headliner trapped inside the skin of a second banana. He was reading when he was three, is an excellent artist and athlete, has an uncanny ability to figure out jigsaw puzzles and also happens to be very funny. He achieves without seeming to try very hard, much in the same way he came into the world. Whether he’s winning a drawing contest in kindergarten or gathering stripes in rapid succession in karate class, we always react to his achievements in an almost nonchalant manner.

As pleased as we are, we’re always aware of how our adulation will affect Rob, who struggles at schoolwork and sports. Instead of giving Zachy his due, we low-key it because we don’t want Rob to feel bad, we don’t want Robbie to think we love him any less or more based on what he does or doesn’t do. And, of course, we totally overreact about anything Robbie attains, which is unfair and downright confusing to Zach.

Until recently, the only dismay Zach ever showed about perpetually standing in Robbie’s shadow was his propensity for crying. Zachy often sounds like his heart is being cut out when Robbie commits the horrible crime of, say, calling him a “chicken” and buk-buk-buk-buking at him. Zachy knows we’ll intervene as soon as we hear his blood-curdling screams, and he’s happy to get this negative attention because it’s better than no attention at all.

So it shouldn’t have come as such a shock when the principal of their school called. As I watched Caryn’s reaction, I assumed the principal was recounting some terrible story about Robbie. As it turned out, she was calling about Zach. He had been goofing around on the bus on his way to school, and the driver told him to sit down and be quiet. Zachy, according to some eyewitnesses in the fifth grade, put his hands on his hips and told the bus driver, “You’re not the boss of me!”

The principal suggested that we have a little talk with Zachy, and so we did. We asked him about the incident, and, after squirming around for a few minutes, he finally came clean.

“I was showing off,” he said. “But can I still have dessert?”

And for some reason, Caryn and I understood. We told him some half-hearted stuff about respecting your elders and then let him have his ice cream cone.

That night, Zachy and I had another one of our little talks.

“What was his name before we adopted him?” he asked.

Zachy seemed to understand. “It’s the same, but different,” he said.

I hadn’t read this story in a long time and while I was transcribing it from an old Xerox copy, I realized that I got a lot of things wrong. In those early days, we attributed almost all of Rob’s shitty behavior to him being adopted. Adoption was the answer to all of our parenting questions back then. We had no idea what we were really dealing with until many years later.

I also got a lot of things right, the most important one being that Zach hasn’t changed since the day he was born. He’s still adorable, bright, funny, sweet, cute and crazy. And I can only assume that he still picks his nose and has stuff in his toes from his socks. But one thing I know for certain–he loved and will always love his brother.

So happy 27th birthday, dear Zachy–the best son and brother in all of the Seven Kingdoms of Westeros.

6 thoughts on “The Same, But Different”